Ah, beer. Humanity’s love affair with the beverage runs long and deep. Just imagine: during the building of the Great Pyramids of Giza, each worker received a daily ration of four to five liters of beer, which was meant to provide nutrition and refreshment—not to mention morale—crucial to the pyramids‘ construction. Hundreds of years before that, in the ancient Sumerian city of Uruk, workers were paid by their employers exclusively in volumes of beer.

Some archaeologists even go so far as to speculate that beer played an instrumental role in the very inception of many early civilizations. For all its long and storied history, however, it was not until the year 1516 that an official declaration was made determining what, in its essence, beer actually is. That declaration is a legal decree known as the deutsches Reinheitsgebot, or German Purity Law, and it regulates the production of beer in Germany to this day, over 500 years later.

Here, without further ado, is a guide to Germany’s most prominent variations on this four-note theme. 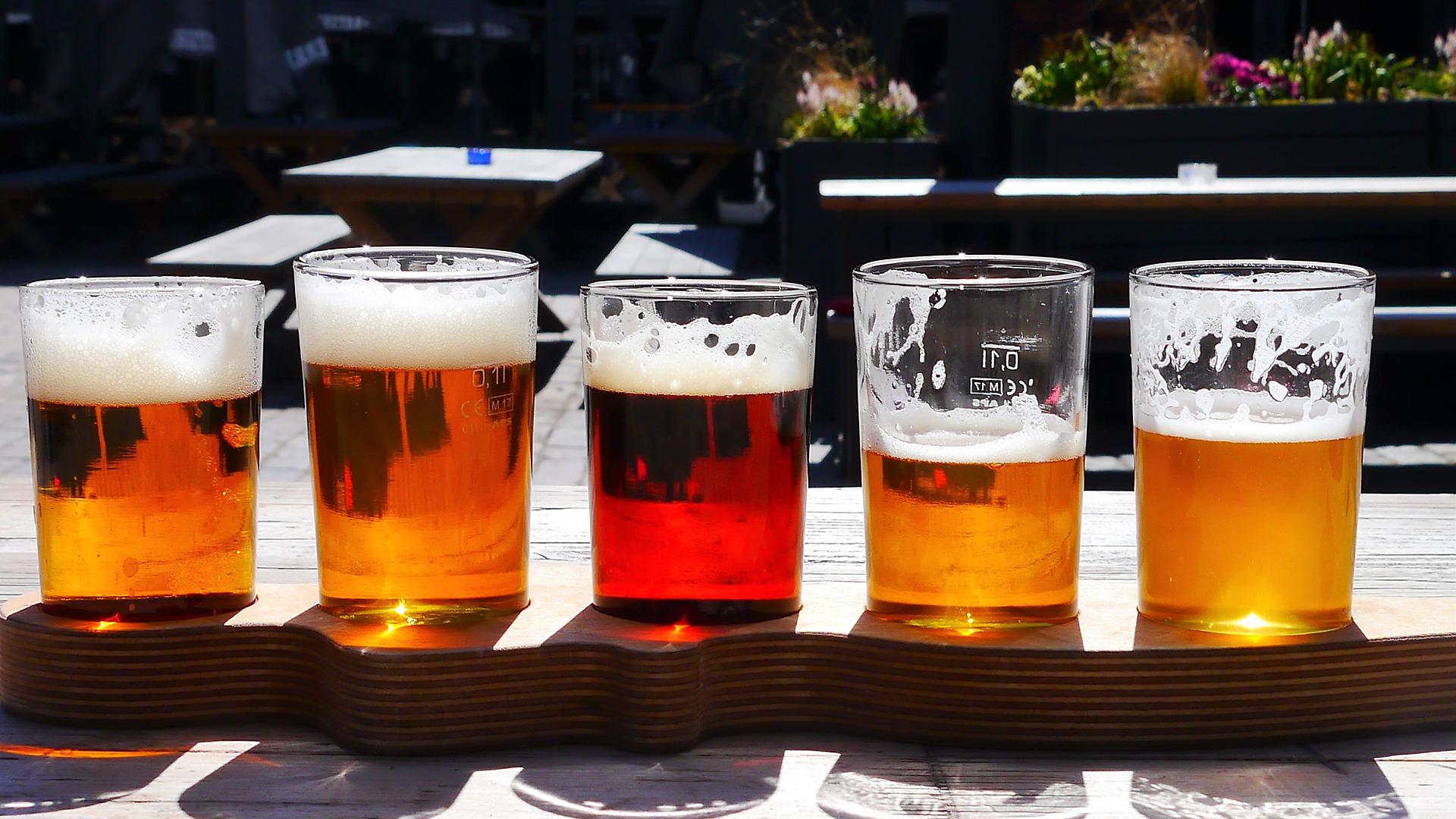 HELLES (LIGHT MUNICH LAGER)
Munich’s trademark beverage is, quite simply, Beer: Degree-Zero. The thing itself. This cool, refreshing, everyday standard pairs well with anything and everything. Helles beers fall in the range of 4.5%- to 5.2% ABV, and are traditionally sessioned outdoors at Biergartens in 1-liter or 0.5-liter glass steins.

DUNKELES (DARK MUNICH LAGER)
The brooding, less popular, but just as lovable sibling of the Helles, the Dunkeles combines dark, roasted notes of chocolate and fresh-baked bread with a light, quaffable body. It’s a beautiful beer with a dark amber to brown complexion, and its German noble hops infuse a slight, refreshing finish without being overly sweet. With its dark, heavy complexion and ABV between 4.5% and 5.5%, you’ll want to drink a Dunkel alongside sausages or an earthy cheese course.

PILSNER
The German Pilsner is an adaptation of the Czech Pilsner first brewed in the 1870s. Its color ranges from straw to pale gold and exhibits a crystalline clarity. The German Pilsner—or Pils—is a light-bodied, highly-attenuated, bitter German beer with excellent head retention and an elegant, floral hop aroma. Crisp, clean, and refreshing, a German Pils showcases the finest quality German malt and hops.

KÖLSCH
The Köln-region’s trademark beer is light, bright, and apply-crisp. Brilliant clarity in some kölsches remind drinkers of a fizzy white wine, and some varieties offer grape and apricot esters that contribute to its appearance, aroma, and sharp mouthfeel. Ranging between 4% and 5.5% ABV, this popular summertime beer is a party favorite at picnics and barbeques, especially if you’re serving burgers or bratwursts off the grill. Serve it in a traditional Kölsch glass or drink it straight from the bottle, ice-cold.

WEIßBIER (WHEAT BEER)
Primarily consumed in Southern Germany, Weißbier derives its tart, spicy, and fruity flavor from high contents of bold, active yeast strains. Pale yellow to honey color and sometimes cloudy in appearance, hefeweizens often have a fizzy head that keeps its place throughout your session. Banana and clove flavors are definitive of the style. Usually falling between 5% and 6% ABV, this is a great beer to savor in summer alongside poultry or fish.

KELLERBIER, ZWICKL & LANDBIER
Kellerbier, Zwickelbier and Landbier are three related styles of lager from the German state of Franconia. All three are unfiltered, unpasteurized and are traditionally hoppier than a helles. Many are served straight from the barrel in Germany.

The name Kellerbier translates to the phrase “cellar beer” because it was produced in cellars, and even caves during the Middle Ages, so it could be brewed and conditioned in cooler conditions during a time before there was any kind of refrigeration. They also have low carbonation because they are conditioned in the open environment allowing CO2 to escape.
With an ABV that ranges from 4.7-5.4%, Kellerbiers are broken down into two sub-styles, Amber Kellerbier and Pale Kellerbier. Amber Kellerbier has a deep gold to reddish-amber color with a malty taste and creamy mouthfeel. Pale Kellerbier is more pale yellow to light gold in color with a little more sweeter taste.
Zwickelbier is similar to a Kellerbier.

The biggest difference being that it has a higher amount of carbonation because it isn’t left exposed to the environment for as long. It is also less hoppy, weaker and darker. The name comes from the name of the valve (a zwickel) on the casks or tanks that brewers sampled the beer from. Both kellerbier and zwickelbier names refer to more about the process that the lager was brewed with than it being an actual style of beer with its own characteristics.

Landbier means “country beer”, which is a term breweries in the Franconian region use for their house beer. It refers to a kind of lager, but no two landbiers are the same. They can differ in color and flavor depending on the brewery. It is generally known as more of a marketing term than it actually refers to a specific type of beer.

SCHWARZBIER (BLACK BEER)
Schwarzbier will surprise your palette a bit if you’re expecting its rich, dark, robust appearance to give you an overly bitter, roasted malt flavor typical of other near-black beers such as stouts and porters. Schwarzbier translates to “black beer” and gets its dark appearance from long-roasted malts. Despite its appearance, it has a lighter-than-expected flavor profile and “twang,” the latter of which is likely due to its roast-based acidity inside of a relatively thin body/malt profile.

You will definitely taste notes of chocolate within this malty brew, but without any harsh, burnt aftertaste. Typical ABVs come in on the low end, falling between 4% and 5%. Schwarzbier’s light, bubbly head make for a brilliant appearance in a flute or other tall vessel, and this cold weather beer is best enjoyed alongside heavy, homecooked German sausages, game meats, or pastries. Goethe used to drink them warm when he was sick. Just saying.

MÄRZEN (OKTOBERFEST BEER)
The official beer style of Oktoberfest and a favorite of Fall revelers everywhere, Märzen is traditionally brewed in March to be enjoyed at festivals starting in September. With a clear, copper to reddish brown appearance, the Oktoberfest’s toasted, malty mouthfeel offers a robust, mildly hoppy lager that packs a punch between 5.5% and 7% ABV.

BOCKBIER or STARKBIER (STRONG BEER)
This strong (7%+ alcohol content), full-bodied beer is a Southern German favorite, traditionally tapped and bottled in March for consumption during Lent. The color ranges from golden to very dark. If you happen to be in Munich at the beginning of March, try to catch the Starkbierfest at Paulaner’s flagship Nockherberg Biergarten and Bierhalle.

EISBOCK (ICE BOCK)
Eisbocks build a highly concentrated body, flavor, and alcohol content by freezing and removing a portion of water from the beer during production. What remains is a very dark, heavy, malty brew that is redolent of chocolate syrup, spice, and dried candied fruit. Drink an Eisbock if you have nowhere to go, as it packs a boozy punch between 9% and 15%. Serve this beer after dinner for a long-lingering liquid dessert.

RAUCHBIER (SMOKED BEER)
Rauchbier is a style of German lager that uses malt smoked over beechwood to impart a unique smoky flavor to the beer. This process was actually the standard way to dry malt until the early 1800s when advancements in technology relating to the malting process allowed brewers to indirectly apply heat to malted grain. This allowed them to remove the hints of smokiness that always made its way into the beer.

While most German brewers adapted with the times, a handful of breweries in Bamberg carried on the old ways of drying their malt directly over a flame. This brought the region notoriety for being the home for this style of German lager.
Rauchbier will have a light copper to dark brown color with an ABV of around 5-6%. The aroma and taste will have a combination of smokey and malty flavors to it. Some people even refer to smoked beers as “bacon beer” because of the smoked, almost meaty flavor.